How do household energy bills compare across Europe?

The average UK household electricity price is at least 30 per cent higher than in many of its European neighbours, with the country’s greater reliance on natural gas for power generation hitting consumers hard.

Europe is experiencing a continent-wide energy crisis caused by reduced oil and gas flows from Russia, but the direct impact on households varies widely depending on the energy mix of the country, according to electricity and gas pricing from Energy Prices, a Dutch consultancy.

Levels of government support, pricing mechanisms and taxation are also important factors, with countries such as France capping the amount electricity prices are allowed to rise. The EU has proposed a cap on Russian gas prices and a levy on energy companies to protect households and businesses, and many European countries have announced individual measures such as tax cuts.

“Russia’s invasion of Ukraine has shifted the energy axis. There can be no other way out of this, other than government intervention,” said Sumit Bose, founder of low-carbon advocacy group Future Net Zero.

But the cost of electricity is still expected to rise across Europe this winter as high gas prices continue to feed through to the power market, while supplies from other sources are down due to issues such as widespread maintenance problems at France’s nuclear power plants and dry weather conditions affecting hydropower.

You are seeing a snapshot of an interactive graphic. This is most likely due to being offline or JavaScript being disabled in your browser. 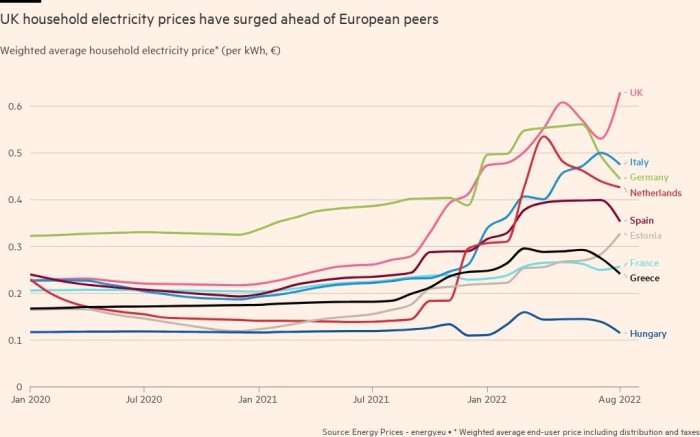 The UK generates about 40 per cent of its electricity from burning natural gas after moving faster than many peers to reduce its reliance on coal.

While that helped cut the country’s emissions — coal generates about twice as much CO₂ as gas when burnt — it has left the UK more exposed to surging gas prices after Russia cut supplies in retaliation for western sanctions imposed after its full-scale invasion of Ukraine.

The UK’s household electricity price is about 30 per cent higher than the next most expensive country, Italy. That is partly down to various levies the UK government adds to bills to support renewable power and poorer households. The UK has said it is less exposed to Russian gas cuts because it has no direct pipeline connections to the country, but cannot completely escape increases in wholesale prices.

The data shown for each country are a weighted average that reflects domestic energy supply. Some households in the UK and Europe have recently signed new energy contracts, while others continue to pay prices according to previous supplier agreements. As a result, new contracts are likely to be more expensive than the average prices shown here.

You are seeing a snapshot of an interactive graphic. This is most likely due to being offline or JavaScript being disabled in your browser. 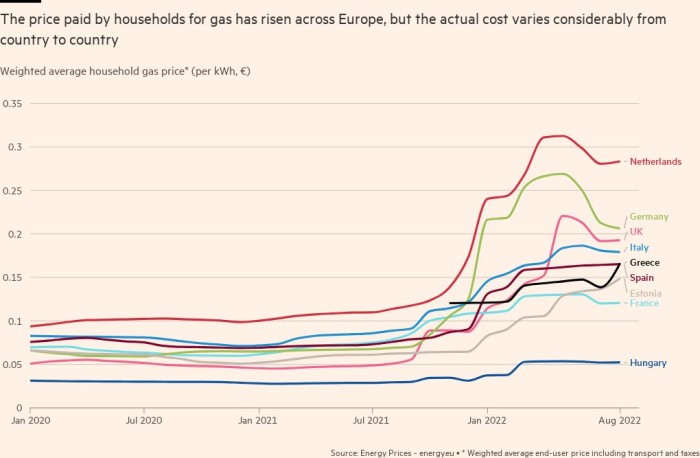 In the UK, the so-called price cap that governs the vast majority of household energy bills was set to rise about 80 per cent in October, but the new prime minister, Liz Truss, is set to introduce a price freeze that will cap the typical household bill at about £2,500 a year.

Higher wholesale prices are expected to feed through to higher household bills in some European countries this winter.

In gas, households in the Netherlands pay the highest costs followed by Germany. Both countries were heavily reliant on Russian supplies. The Netherlands has also largely shut down the Groningen gasfield, which was once Europe’s largest, because its depletion was causing earthquakes in the town.

The UK has the third most expensive household gas prices, despite the wholesale price trading at a lower level than the European benchmark for most of this summer, primarily as a result of the UK’s higher level of liquefied natural gas import capacity and domestic production from the North Sea.

UK companies have been sending imported LNG to mainland Europe via pipeline to help countries fill their storage facilities.

Hungary had the lowest household gas costs by a large margin until August. Rejecting criticism from other EU members of its relationship with Moscow, Prime Minister Viktor Orbán has said he had agreed a number of deals with Russia to ensure lower-priced gas deliveries.

But Hungary has still seen gas import costs rise as prices have soared and is removing subsidised price caps on household usage above the average rate of consumption.

Please Install Theme Required & Recommended PLugins.
Thanks for letting us know!
This is how we improve bertha
What did you expect to happen?

We use cookies to enhance site navigation, analyse site usage, prevent fraud and assist in our marketing efforts through personalised ads and content. By continuing to use the service, you agree to our use of cookies.
Protected by Patchstack